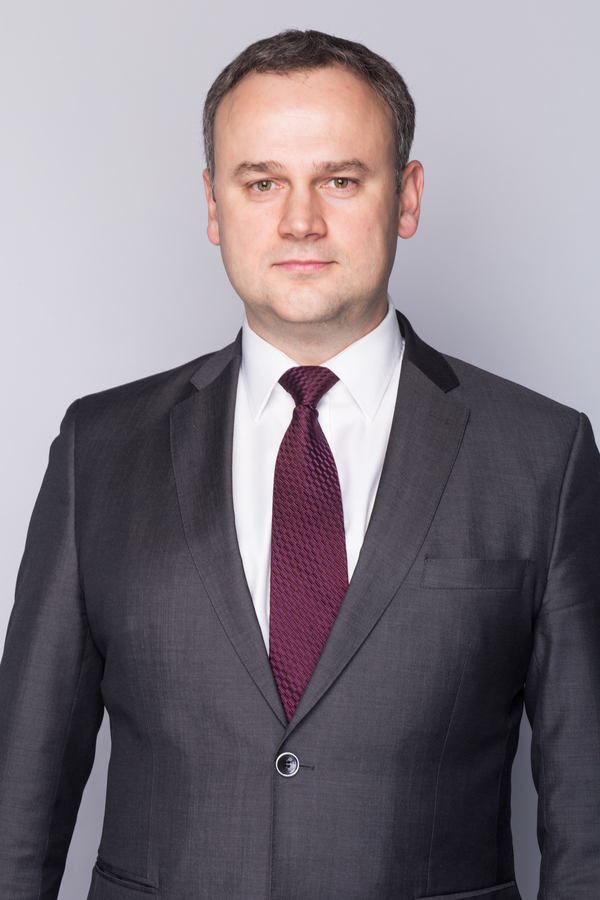 Martynas Pečiulis has more than 20 years of experience in dispute resolution (litigation, arbitration and other proceedings). Through his legal practice he represented clients before courts of all instances of the Republic of Lithuania as well as before the Court of Arbitration of the International Chamber of Commerce (ICC). Martynas regularly represents clients in court proceedings in complex commercial disputes arising from contractual legal relations (sale and purchase, contract, lease, assignment, loan, transportation, insurance etc.), in the cases regarding indemnification of damage, property as well as bankruptcy and restructuring cases. Furthermore, he has extensive experience in employment, family and inheritance matters.

Education:
In 2001 graduated from the Faculty of Law of Vilnius University.

Professional activities:
In 2000 started working as a Lawyer in the Legal Department of AB “Lietuvos Energija” branch “Vilniaus Elektros Tinklai”. From 01.07.2000 has been a Head of this Department. On 18.10.2001 was included into the list of Assistant Attorneys. Since 2003 has been working as an Attorney at Law.

Experience:
Represented a client - a shareholder - in a legal dispute with another shareholder with the majority of votes (shares) and the company regarding the payment / award of dividends. The court hearing the dispute has accepted the arguments that the shareholders’ decision to pay dividends has clearly defined legal consequences since the moment of adoption of the decision; therefore, in the absence of such a decision challenged in court, there is no possibility not only to revoke it, but also to change, postpone its execution or the like. The client's claim was upheld in full. The court ruling led to shareholder negotiations that ended in a peaceful division of business.

Represented a client in a legal dispute over award of remuneration for services rendered in restoring ownership of land with buildings. For several years, the client has represented and provided other necessary services related to the restoration of ownership rights to land with buildings. The process of restitution was largely successful due to the client’s effort, i.e. the rights of ownership to real property the value of which was higher than EUR 1,000,000 have been restored. Nevertheless, the person who received the property has refused to pay the agreed remuneration to the client, inter alia, stating that it was excessive. The dispute reached the Supreme Court of Lithuania, was heard twice in the Vilnius Regional Court and the Court of Appeal of Lithuania. Finally, the chamber of judges of the Civil Division of the Court of Appeal of Lithuania has acknowledged that the agreement entered into voluntarily between two natural persons and not disputed in accordance with the procedure established by law and its terms should not be questioned, except on the grounds provided by law. The parties have agreed on such amount of the remuneration by free will and in the present case it has not been proven that the respondent was forced to accept such remuneration, any pressure was exercised against him or other unfavourable circumstances distorting his will existed. The court awarded the client almost EUR 200,000 in remuneration for services, material and procedural interest and legal costs.

Represented one of the largest companies operating in the Polish infrastructure and energy construction sector in the civil case concerning the intentional bankruptcy of a former subsidiary. The creditor whose financial claim amounted nearly to EUR 4,000,000 sought for recognition of the bankruptcy of the subsidiary as intentional, alleging, inter alia, that the client, as a shareholder in the bankrupt company, had been unfairly relocated the subsidiary's core business. The court upheld the attorney's position that the bankruptcy of the subsidiary was caused by business failure and not by deliberate poor management and governance of the management bodies or the shareholder. Furthermore, the court did not find that the client took over all operations generating income to the subsidiary. The creditor’s application was rejected.

Successfully represented a client, i.e. the Central Procurement Organisation, before the courts of first instance and the appeal court in the public procurement dispute over centralised procurement of medicinal products (the planned total purchase value is more than EUR 144,000,000 excluding VAT). Both the court of first instance and the court of appeal acknowledged the decisions of the client as lawful and reasonable and dismissed the supplier’s claim.

Successfully represented a residential housing association in a legal dispute with the National Land Service under the Ministry of Agriculture concerning recognition of termination of the State-owned land lease contract as unlawful. The chamber of judges of the Civil Division of Klaipėda Regional Court has stated in its judgement that the National Land Service has failed to prove that any grounds for early termination of the land lease contract provided for in the law existed; therefore, it has emphasised that the contract was unlawfully terminated. Consequently, the client has retained the possibility for implementing the planned apartment building project.

Successfully represented one of the largest distributors of agricultural machinery in Lithuania in a legal dispute with a former employee regarding unfair competition and damages. The chamber of judges of the Civil Division of the Court of Appeal of Lithuania acknowledged in the final procedural decision that after terminating the employment contract with the client, the respondent (employee) was employed by a competing company, therefore violated the non-compete agreement and should assume the liability. The former employee was ordered to pay more than EUR 26,000 in damages to the client.

Represented the manager and shareholder of the bankrupt company in a court dispute concerning indemnification of damage caused as a result of a delay to file an application for bankruptcy proceedings to the court and recognition of the company's bankruptcy as fraudulent. The cases were settled amicably, with the parties reaching their satisfaction by mutual compromise.

At the request of the administrations of two Lithuanian city municipalities, carried out legal evaluations of the contractual and related documents concerning modernisation and renovation of the respective city heat sector.

Provided comprehensive legal services to the construction company in the negotiation process with a debtor, credit institution and investor for implementation of the real property project the value of which was more than EUR 6,500,000. Negotiations were successful and the project was fully implemented.

Provided long-term and comprehensive legal services to a client, i.e. real property project developer, renting the premises of one of the most famous business centres in Vilnius (leased area - more than 28,000 sq. m.): prepared lease contracts, amendments, supplements to the contracts, other contractual documents, represented the client in negotiations, advised on all legal issues arising in the course of performance of the contracts.

Successfully represented a client in a court dispute over the demolition of an arbitrarily constructed building. The court agreed and held that the demolition of the building in this case was not a reasonable and proportionate measure to eliminate the consequences of the illegality of the construction. The client was provided the possibility to take care of the preparation of the necessary documents and performance of procedures. The building, built a number of years ago was preserved and the client was able to continue its business there.

Represented a client in court disputes with one of the largest commercial banks of the Federal Republic of Germany over payment of the issued promissory notes/declaration of the issued promissory notes null and void. The proceedings have ended with a peaceful settlement agreements as the terms and conditions satisfactory to the parties have been reached by a mutual compromise.

At the request of a client, prepared a legal opinion on the duty of the insurance company to pay an advance insurance indemnity in the amount more than EUR 2,700,000 to compensate for damage caused by a fire that occurred in the premises of one of the largest production companies in northern Lithuania.